Happy Frog Potting Soil Review: Is It Worth the Money?

There’s nothing that says summer like a terra cotta planter full of beautiful, blooming flowers. Even when you have borders and flower beds, it’s nice to have potted plants that you can place on doorsteps and patios to add cheer and color. If you’ve been shopping for the best growing medium for your container plants, you may have run across a Happy Frog potting soil review or two.

Happy Frog comes from another name that you might be familiar with: Fox Farms. Fox Farms produces organic potting soil, soil conditioners, and fertilizers.

Although this California company has been around since 1991, the boom in internet commerce has resulted in its quick growth. Their signature hippy-era branding style has made them stand out from other, similar companies.

Along with the Happy Frog mix, Fox Farms offers several other blends of potting soil. Each has distinct properties and comprise a combination of different organic materials.

Some contain ingredients such as coconut coir, which provides a lighter soil with better aeration qualities. Other mixes, such as the “Ocean Forest” blend, includes fish emulsion and crab meal for extra nutrition for your container plants.

Other products from Fox Farms

Fox Farms also prides itself on several lines of organic gardening products. These include soil conditioners, liquid supplements, and fertilizers. They offer a number of organic, OMRI-certified fertilizers in both instant-feed liquids and slow-release formulas.

For helping to control pests like mites, thrips, and aphids, or diseases like powdery mildew, Fox Farms offers products to those who prefer to address garden problems organically. They use natural pyrethrum from chrysanthemum flowers for insect control and garlic extracts for insect repellents.

Along with traditional gardening supplies, they also offer a range of hydroponic products. These high-powered nutrient solutions allow you to garden in soilless mediums for increased production. These work well for indoor gardening during the cold season, or even outdoors for those with little space.

Fox Farms describes this formula as a complete soil specifically designed for container gardening. Whether you’re growing fruits, flowers, or vegetables, they packed it with good organic ingredients for healthy plants.

These beneficial microbes and mycorrhizal fungi are similar to those found in natural soil that help to break down organic material. So, adding them to your potting soil replaces these microbes and provide the environment that most container plants don’t get to enjoy otherwise.

Also included in Happy Frog are oyster shells and dolomitic lime, which aids with pH balance and makes it ideal for certain plants. Tomatoes and squash, for example, are susceptible to blossom end rot. This condition ruins your vegetables, but you can prevent it with adequate calcium supplementation.

Happy Frog Potting Soil also contains perlite, which comes from volcanic glass formed when lava cools. It’s surprisingly light and provides aeration to the soil. This makes it easier for plants to send out an extensive feeder root system for optimum health.

A comprehensive Happy Frog potting soil review requires that we look at the manufacturer’s other potting soils to see how they differ. This helps us compare the formulas based on their ingredients to form a recommendation.

This formulas specifically targets the nutritional needs of fruiting plants, such as berries and even tomatoes. Fruiting plants require higher levels of potash for fruit formation.

With a blend of earthworm castings, bat guano, fish and crab meal from the Pacific Northwest, this formula also includes sandy loam, forest humus, and sphagnum peat moss. This is an excellent combination for plants that require a rich, nutrient-dense environment.

This moisture-retention formula helps delicate seedlings flourish by encouraging just the right amount of moisture. Seedlings are thirsty, but can often suffer from damping off unless you’re very careful with your watering methods.

Fox Farms claims this formula keeps them moist, even if you can’t tend them as much as you’d like. It’s also suitable for hot-climate gardeners.

Their original formula includes a mix of composted leaf mold, sphagnum moss, and earthworm casting. This blend increases moisture retention but doesn’t provide as many nutrients as the newer blends.

While all of the Fox Farm potting soils are top quality, the Happy Frog line features mycorrhizal fungi.

What are those? While the idea of “fungi” in your potting soil may seem a bit gross, these are specific types that work with your plant. Mycorrhizal fungi develop a symbiotic relationship with plants.

This effectively extends the area from which the plant can find nutrients.

They also make your plants more resistant to disease and environmental stress. In exchange, your plants provide sugars to the fungi and feed them.

Perhaps because of its psychedelic packaging, or maybe because of its product motto: “In the Spirit of the Humboldt Nation, Fox Farm products are a big favorite with cannabis growers. Many of these have taken the time to express their opinion of Happy Frog potting soil. Professional reviewers all unanimously appreciate it’s light texture. Heavy soils can stunt the growth of our plant.

One top-rated site, 420friendsapp, listed Happy Frog potting soil in their Top 5 list. They lauded the added microbes and fungi, as well the results received.

Another site offering advice for cannabis growers gave it an 8 out 10 rating. And while they gave it a good rating, they expressed concern that the microbes might make the soil too hot for tender seedlings. The chemical processes provided by microbes can increase the temperature of the soil. They also preferred the Fox Farm Ocean Forest blend because the seaweed and kelp amendments provide more nutrients.

But not all professional growers that rely on Happy Frog grow cannabis. Rainbow Gardens in Texas also gives a glowing Happy Frog potting soil review. Growers there were highly impressed with the rich ingredients it contains. The reviewer said that her gardening yields after using Happy Frog have resulted in an “amazing difference.”

Another reviewer from Garden Rant doesn’t go into much detail but endorses Happy Frog with enthusiasm.

Fox Farms seems to have developed a very pleased customer base with its range of products. And whether they’re growing herbs or hostas, you’ll find customers awarding plenty of stars in each Happy Frog potting soil review:

And retailers have listened, which means you can purchase it from a wide range of vendors.

Amazon customers give an average rating of 4.5 out of 5 stars, with nearly 80 percent giving 5 stars in their Happy Frog potting soil review on this retail platform. One of the few complaints about this product was the price.

Farm and Fleet buyers gave it 4.9 out of 5 stars, even though a few customers suffered from the shipping process with damaged bags.

Walmart shoppers offer a 4.9 out of 5 stars in their Happy Frog potting soil review

Happy Frog Potting Soil Review: Up Against the Competition

Before investing your money in Happy Frog potting soil, you may want to check out a few of their closest competitors. 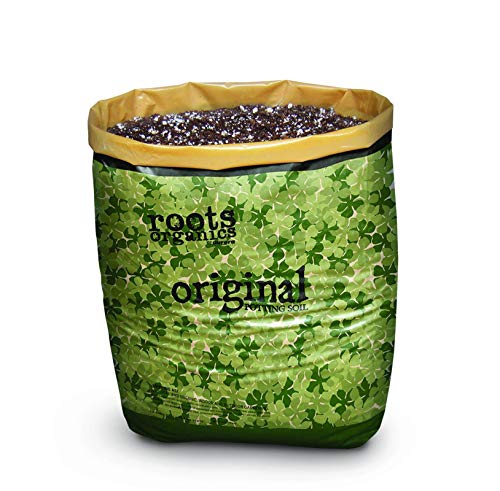 It also features coconut coir instead of sphagnum peat moss, which many customers may prefer. The harvest of peat is highly controversial, and many organic gardens have banned its use because it’s not a sustainable resource. Coir fiber is an excellent substitution.

Amazon buyers give Roots a solid average rating of 4.3 out of 5 ​​stars. 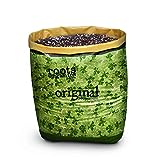 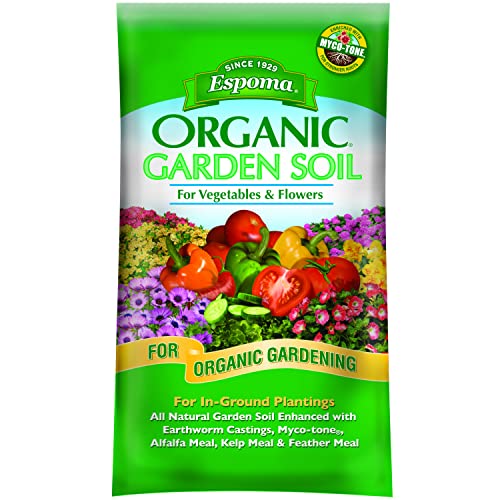 This highly reputable brand has long been a leader in organic gardening products. Their organic mix includes sphagnum moss, peat humus, and earthworm castings. They also boast of a proprietary blend of mycorrhizal fungi, with 11 different strains that work both externally and internally for healthy plants.

Amazon buyers rate the Espoma brand of organic potting mix 4.4 out ​​of 5 stars. 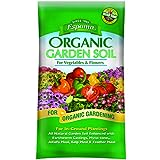 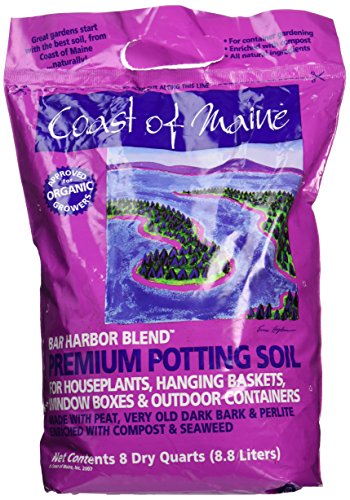 Amazon buyers rate the Bar Harbor blend an extremely impressive 4.8 out of 5 stars.

It looks like Happy Frog is an excellent potting soil blend, but that doesn’t mean that there aren’t some concerns.

This fertile potting soil contains a wide range of nutrients that benefit most plants. And while it is expensive, the old adage that you get what you pay for applies here. Many users and pros have lauded its water retentive properties.

There are really only two significant concerns about Happy Frog potting soil. The first is the issue surrounding the use of sphagnum peat moss. In the U.S., we get most of our peat moss from Canada where the peatlands have been sequestering carbon for eons. Harvesting peat returns carbon dioxide to the atmosphere and adds to greenhouse gases. Along with this problem, harvesting also increases the chance they’ll catch on fire, which also ads to carbon emissions.

While we only use the decomposed matter below the bogland surface, they need to remove the green layer of live plants to get to it. These bogs grow so slowly — only one-sixteenth of an inch a year — that we can’t reasonably call them a renewable resource.

So, whether you choose to use potting soil that contains peat moss or not may be more than just a casual question. Even the Royal Horticultural Society has called for a ban on its use.

Another is an issue that a few users have run into with Happy Frog. Some users have complained of burning.

And one gardening YouTuber, BrightGreenThumb, tested it against a selection of other brands as well as homemade mixes. And while the early growth with the Happy Frog mix was impressive, he also suffered serious problems toward the end of the growing season.

While Happy Frog sounds like a superior potting soil, it may not be the best kind over the long term. After collating reviews from customers, one suggestion seemed to form a real trend. Many of users decided to combine both the Forest Ocean blend with the Happy Frog in order to benefit from the marine-based soil amendments as well as the mycorrhizal fungi.

While such fungi are critical to plant health, container plants require so much more fertilizer than those grown in the ground. For long-term plant health, we recommend the Ocean Forest blend. Mixing it with the Happy Frog soil for the mycorrhizal fungi would give you the best of both products for the optimal growing medium for your plants.

And with that said, we’d be tempted to try the Coast of Maine potting soil. Most of these company’s products have been well reviewed, and the ingredients list has us intrigued. However, it can be difficult to find in retail stores and extremely expensive to ship.

What is your favorite brand of potting soil? Have you used organic products yet? Give us your recommendations in the comments below.